is a project space initiated by artist Lisa Sudhibhasilp that physically limits itself to a street advertisement board. Artists and designers are invited to react to this peculiar presentation context, the display conditions and the public of walkers-consumers. is interested in practices that challenge the culture of advertisement and the notion of merchandise.

The only thing that can affect magnetic inversion is bad news

On the highway to hell, call a space a spade, especially when a sparrow in the hand is better than the pigeon on the roof. In French, one would say call a cat a cat, but what’s lost in translation is whispered down the lane. By trial and error, step-by-step and maybe on one’s toes, a word spoken cannot be recalled. Lest we forget, it’s hard to remember the swan song. Off the beaten path, we are waiting for the snail-mail and on the tip of my tongue, the sentence pulled a vanishing act. Disappeared into thin air, the name of the game becomes the bird of passage. And once gone, we come to the end of the road.

Marine Kaiser asked designer and screen printer Brent Dahl to not only print her work but also to freely design one sticker as an additional voice and perspective on this public object, which then took an unexpected detour. Text by Lisa Sudhibhasilp and Dutch translation by Roberta Petzoldt.

With Kapsalon, AVOIDSTREET plays the field between fast food and slow culture — each one influencing the other. Much like sportswear entering high fashion, the iconic Rotterdam snack is on its way to becoming national heritage. AS navigates between traditions and values, shifting trivialities into trendy aesthetics. The Kapsalon uniform has to be worn for excessive dancing under artificial lights and running until the first beads of sweat give way to exhaustion.

AVOIDSTREET is a multi-disciplinary design practice that fuses fashion, graphic design, and performance in a rhizomatic way. AS focuses on showing the beauty of the banal and projecting ‘high-gloss luxury’ onto the everyday. Initiated by Eduardo León, Peruvian-Italian graphic designer and artist based in Amsterdam.

Snacks is a vending machine and exhibition space on the Ten Katemarkt in Amsterdam.
Thanks to Mariana Jurado Rico for playing music for the finissage. 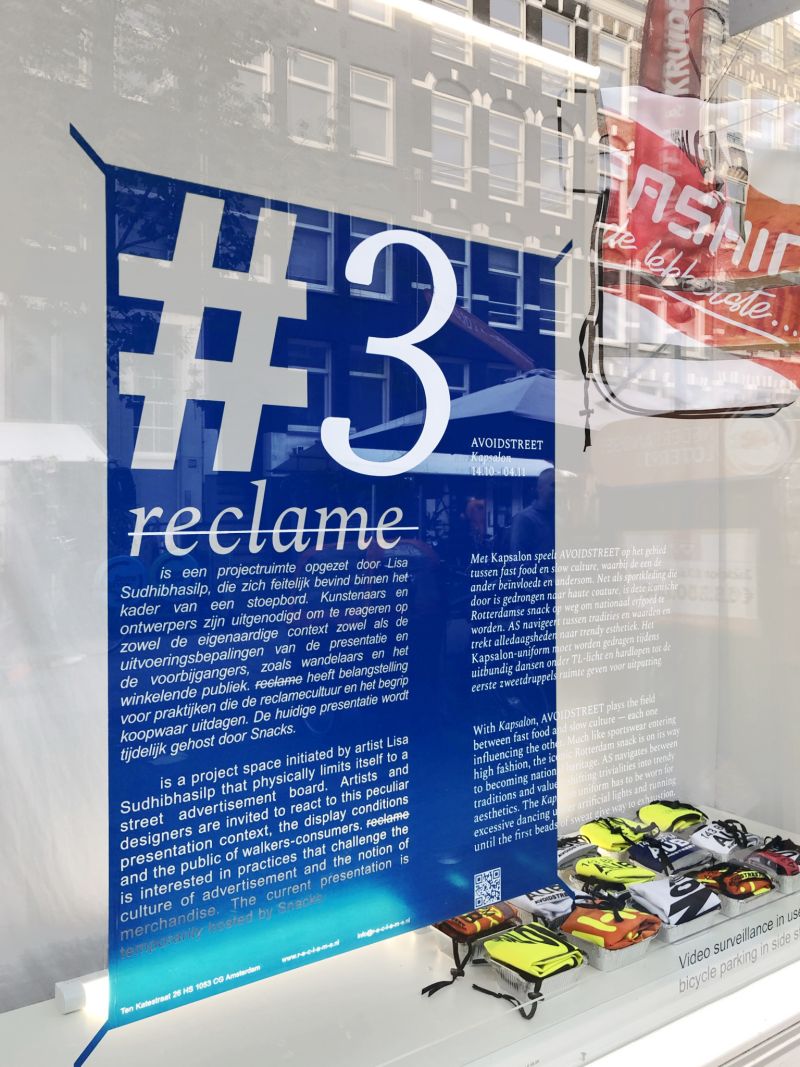 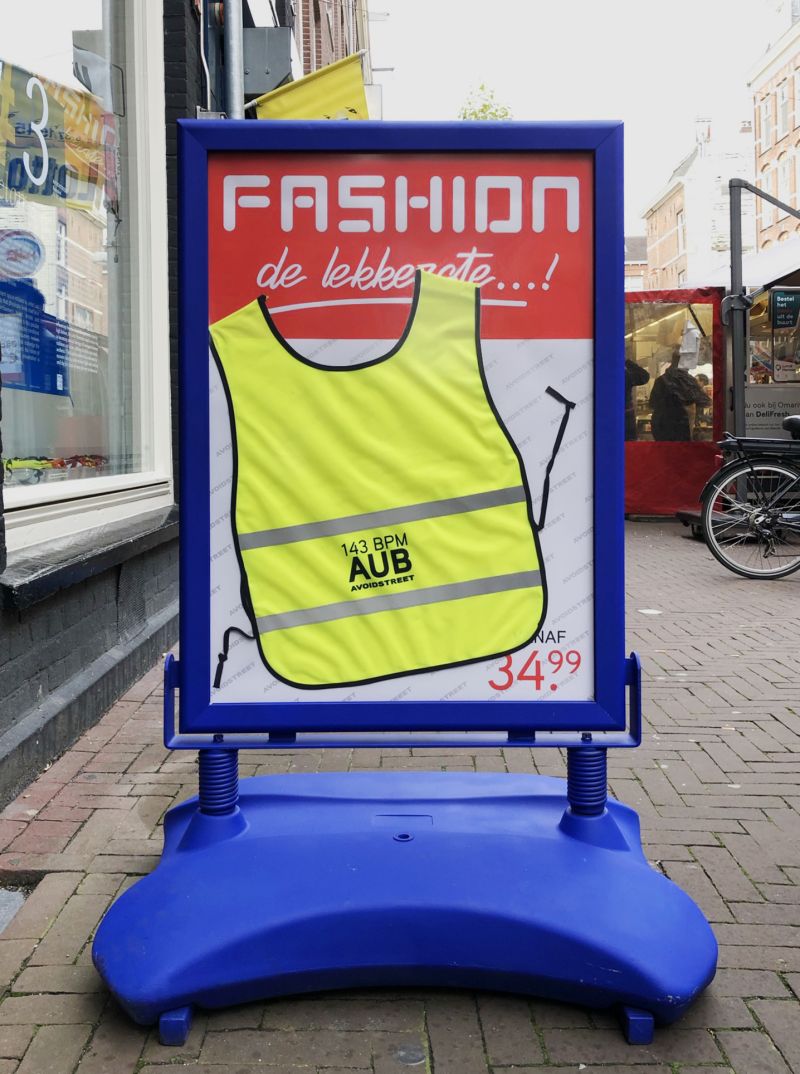 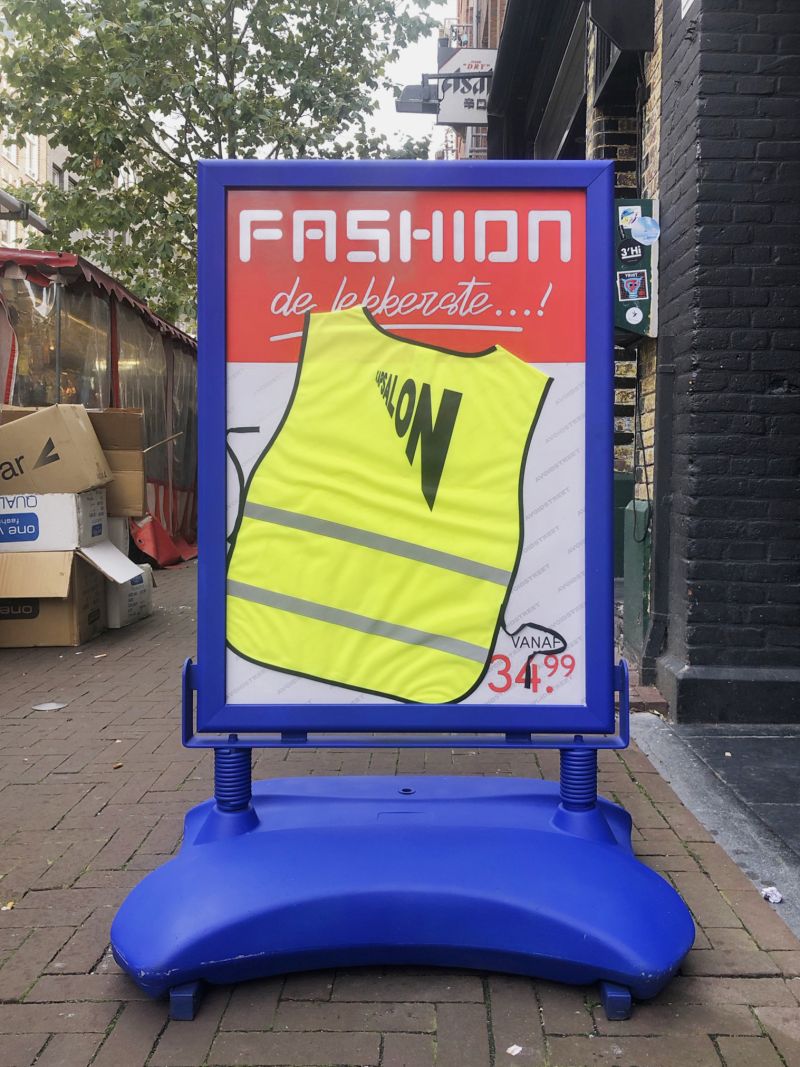 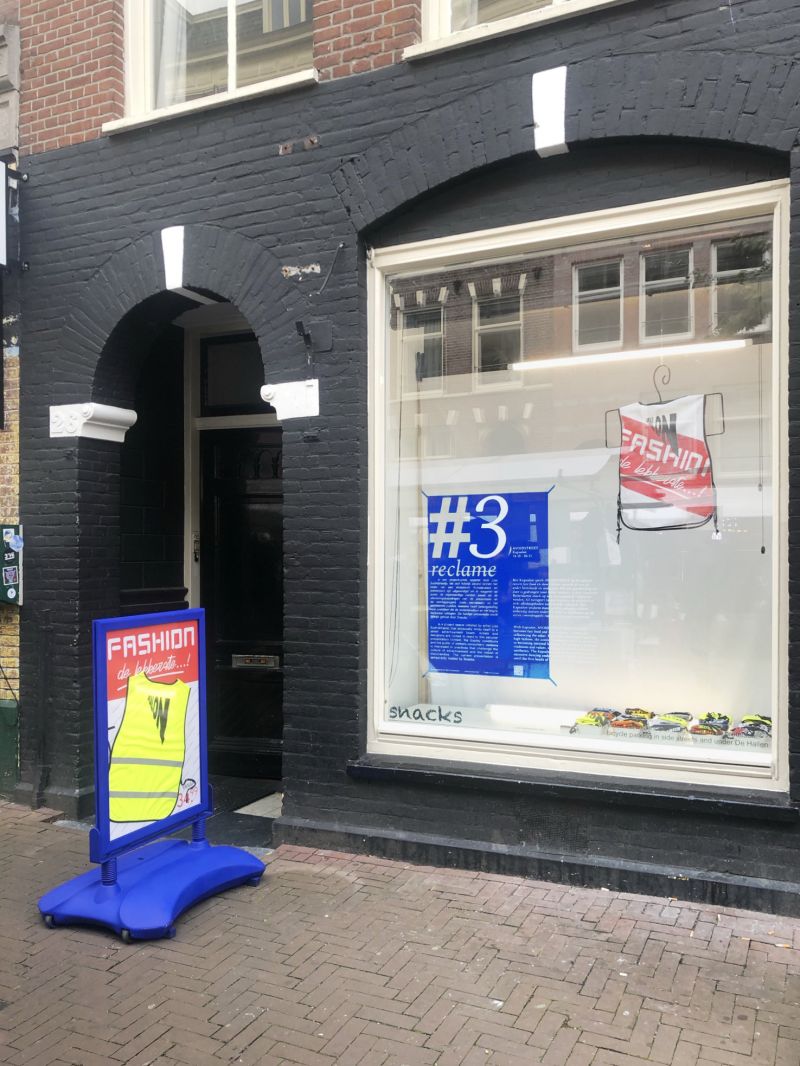 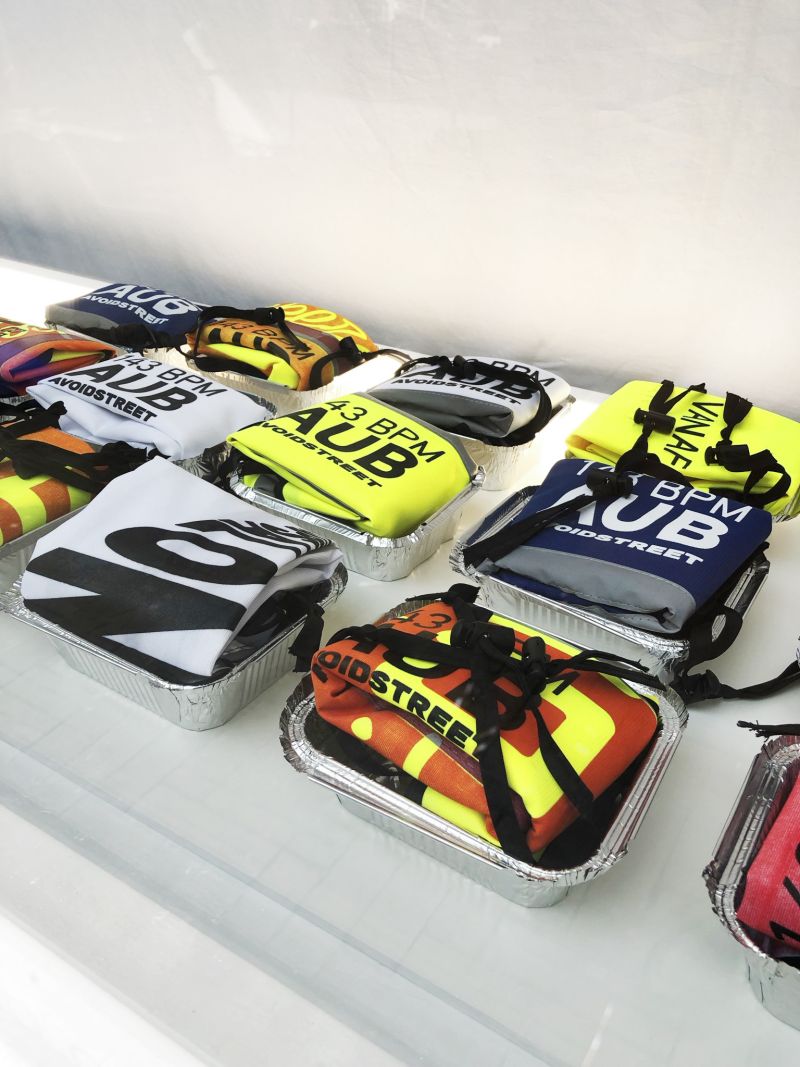 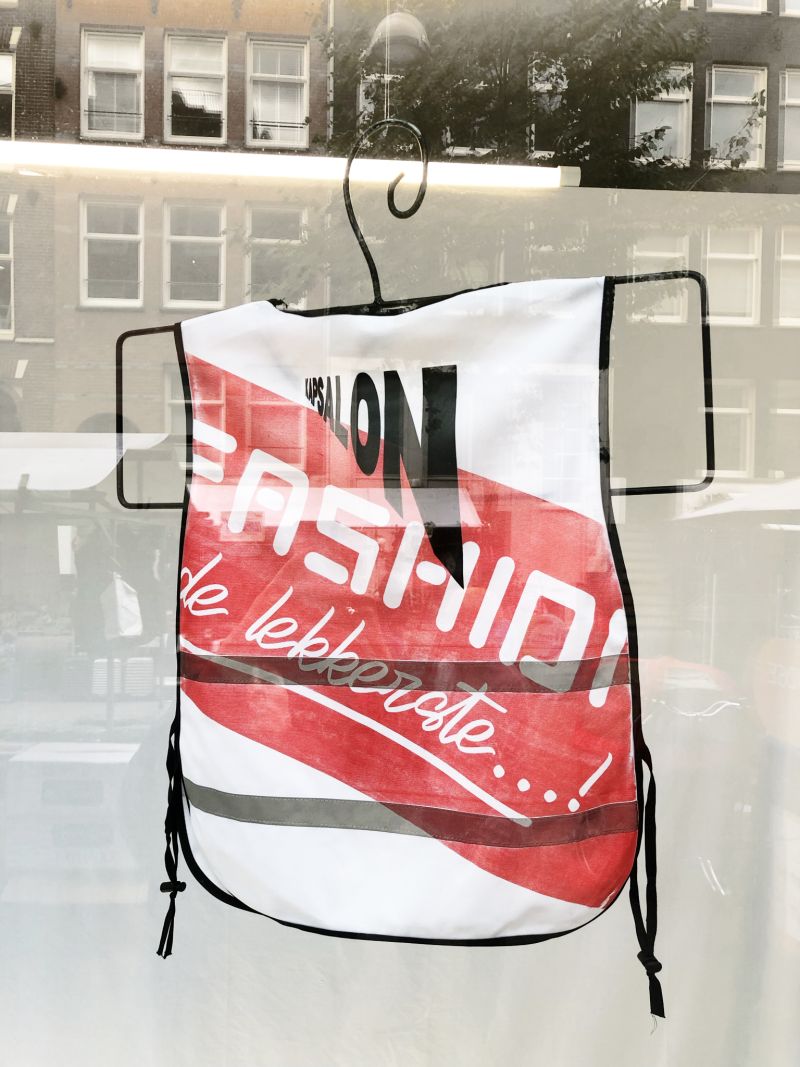 A while ago I decided to never ever again accept requests to exhibit in temporary vacant/anti-kraak art spaces. This is because, in my opinion, these spaces indirectly fuel gentrification. I can explain this later. But since I find a sympathetic art initiative, Lisa a nice person, and even more after discovering some interesting information about the owner of this building, for the last time I said yes.

Eva Pel (NL 1973) is an artist living and working in Amsterdam. With a background in artistic research and geography her work shifts between political engagement and subtle mediation. She employs her interest in how social behaviour is affected and changed by our everyday life, a life that is influenced by our shared space, digital and physical. Her work manifests itself in a range of media, such as video, photography, objects and publications. Since 2013 Pel has been teaching art theory at the pre-course of the Gerrit Rietveld Academie in Amsterdam. Her work has been exhibited amongst others at Frankendaal Foundation (Amsterdam), Witzenhausen Gallery NY, the University of Amsterdam, van Eyck Academie and Salzamt Linz. Her work will be shown at This art fair 26-29 August 2021 at the Kromhouthallen in Amsterdam Noord.
Eva Pel is generously supported by the Mondriaan Fund.

A text was produced for the occasion, find it here.
Thanks to Lae Schäfer for the live drawings.
Images from Agnes Denes, Wheatfield — A Confrontation, Battery Park Landfill, Downtown Manhattan, 1982 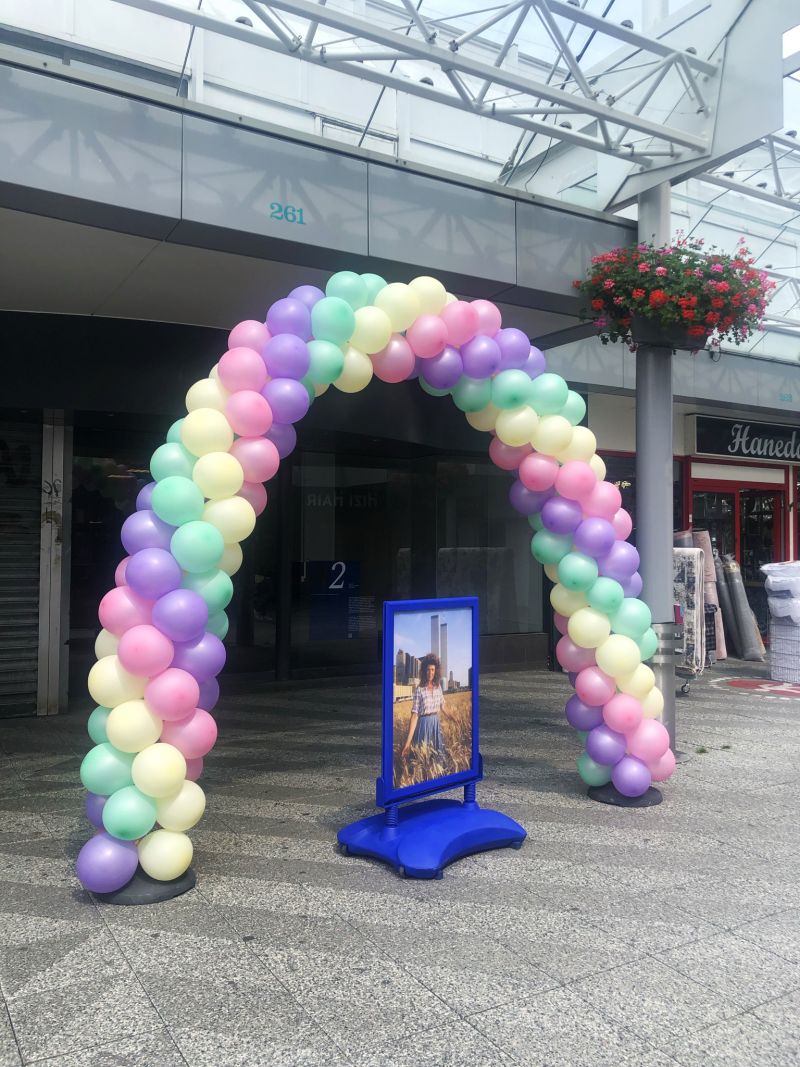 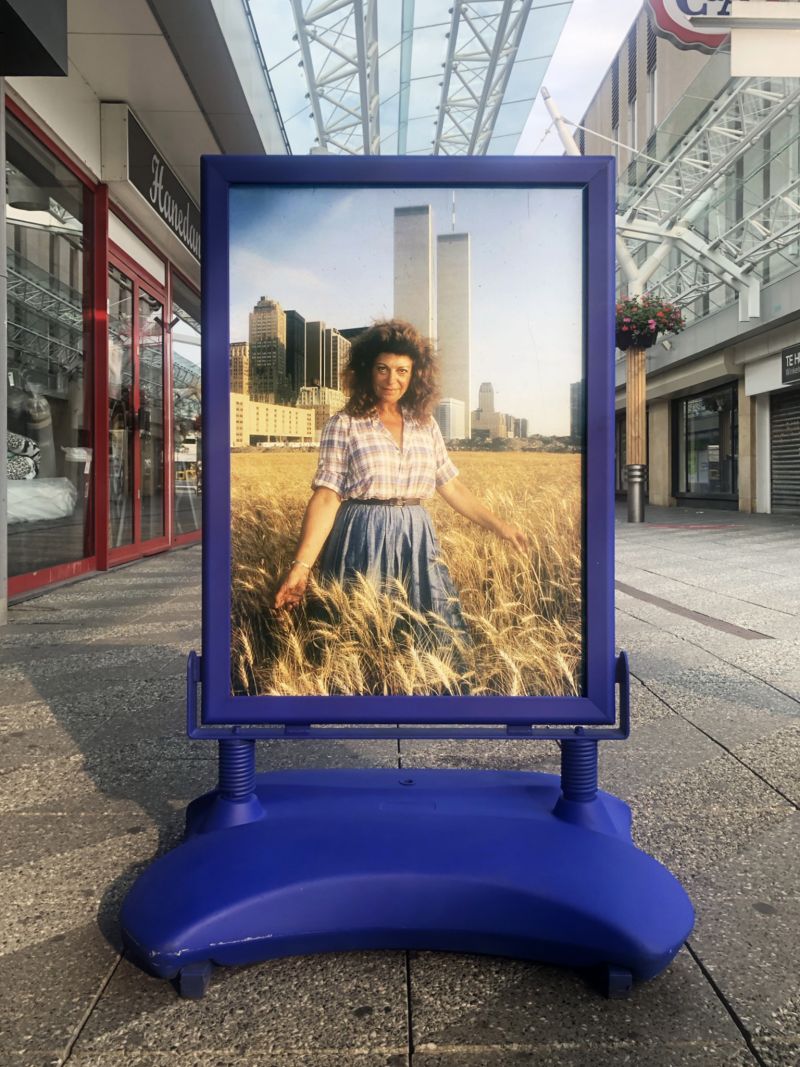 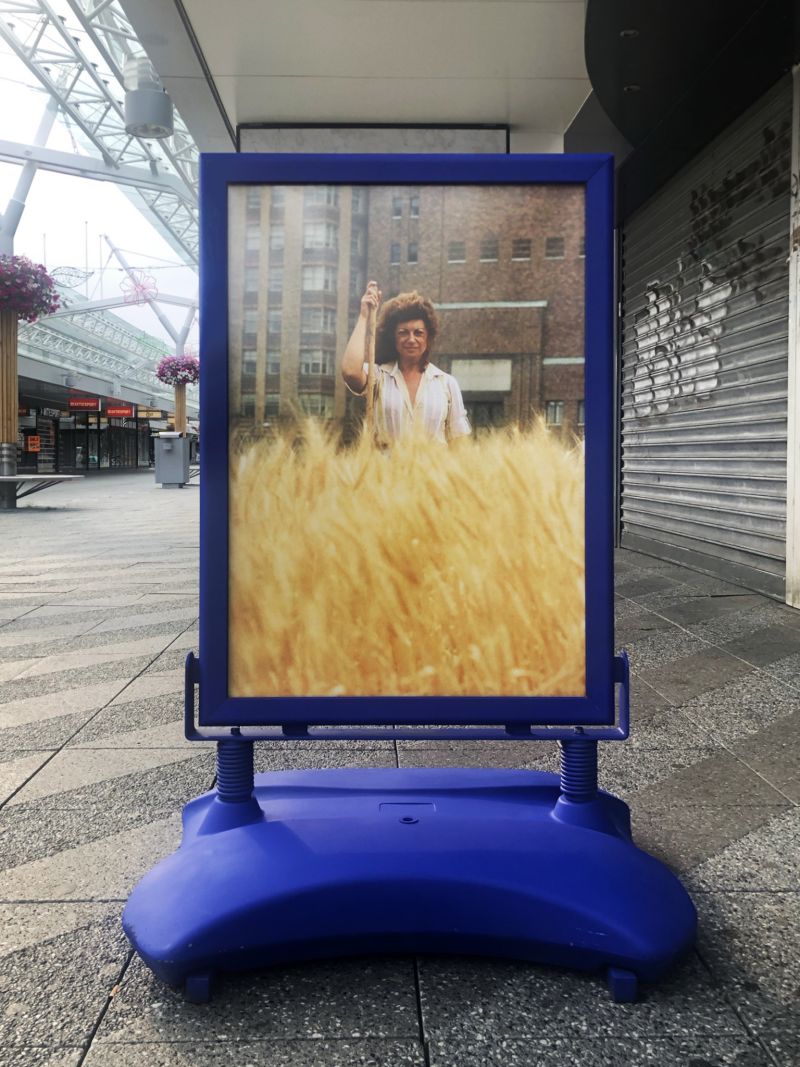 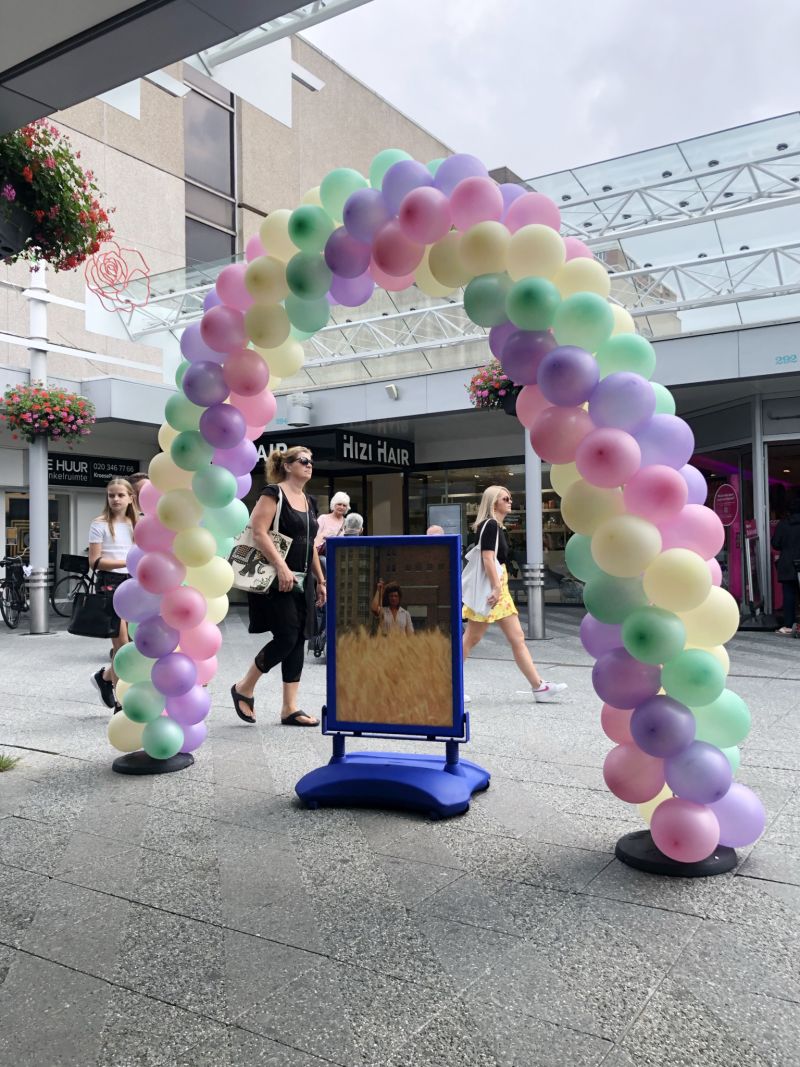 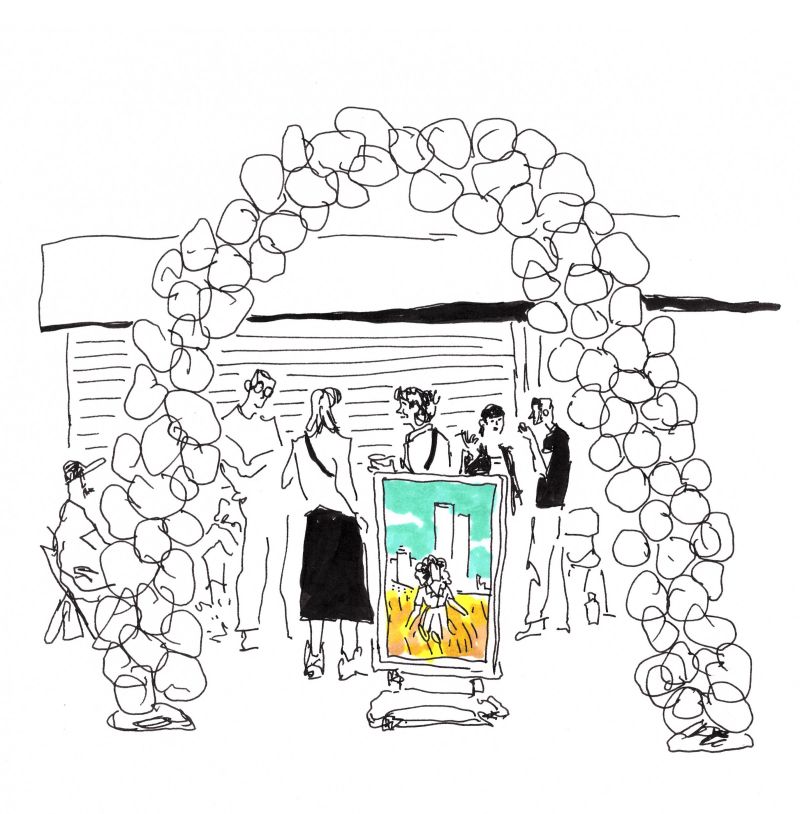 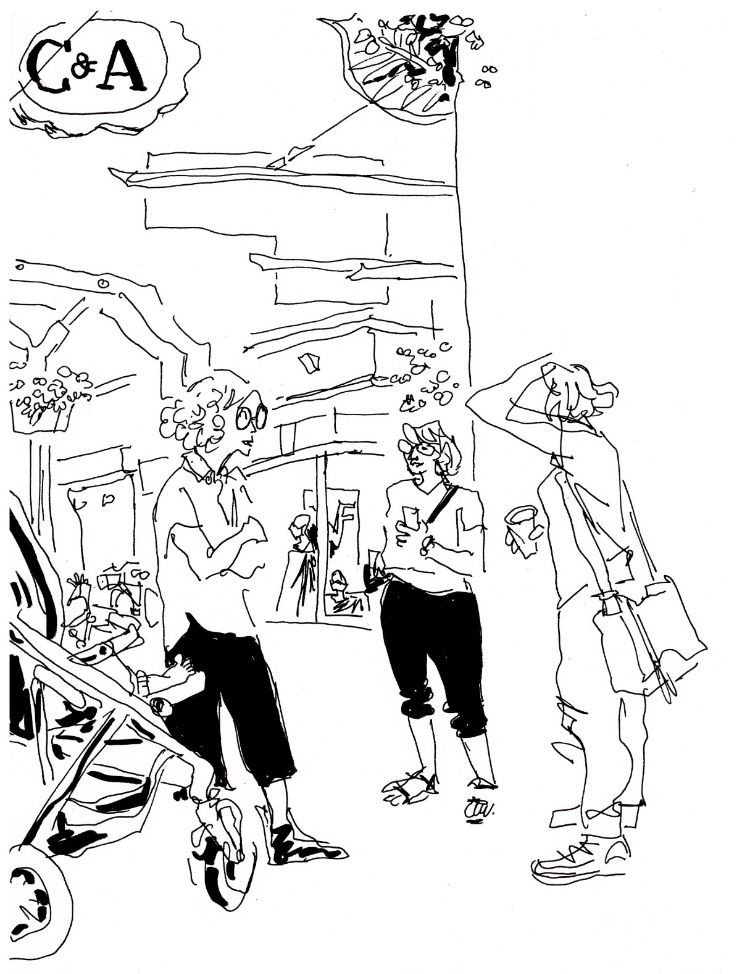 For the first presentation, Jungmyung Lee proposes a visual translation of “hamstering”. This expression, originating from the German Hamsterkauf, found use as hamsteren in the Netherlands during WW1 and was eventually co opted by Albert Heijn as a marketing slogan. Most recently, the notion was revived during the lockdown due to the negative effects of individual stockpiling. For Lee, this panic buying starts with the visual abundance of promotional messages intended to lure consumers. As a result, her overloaded, and thus absurd collage, proves to be inefficient and furthermore becomes an anti-marketing strategy in and of itself.

Jungmyung Lee is a typographer from South Korea interested in the intersection of human emotions and typographic forms. She manifests that typefaces have other interests besides words and her primary focus is telling stories and exploring the life of typefaces and their emotions. 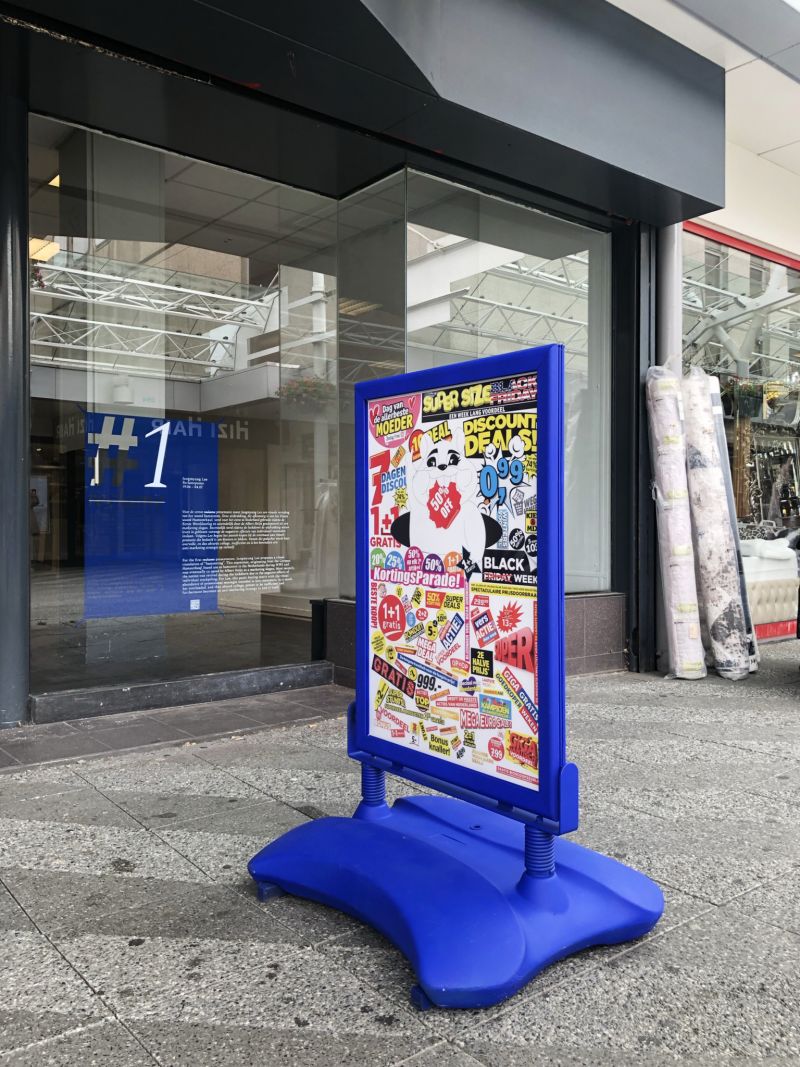 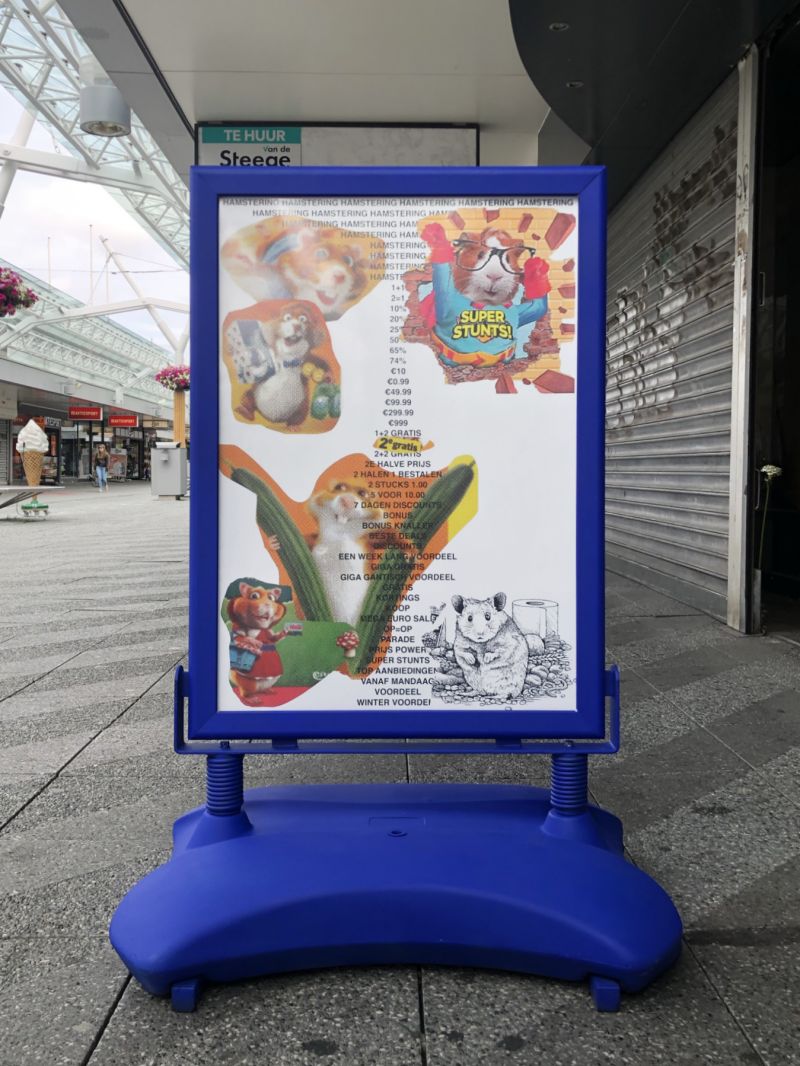 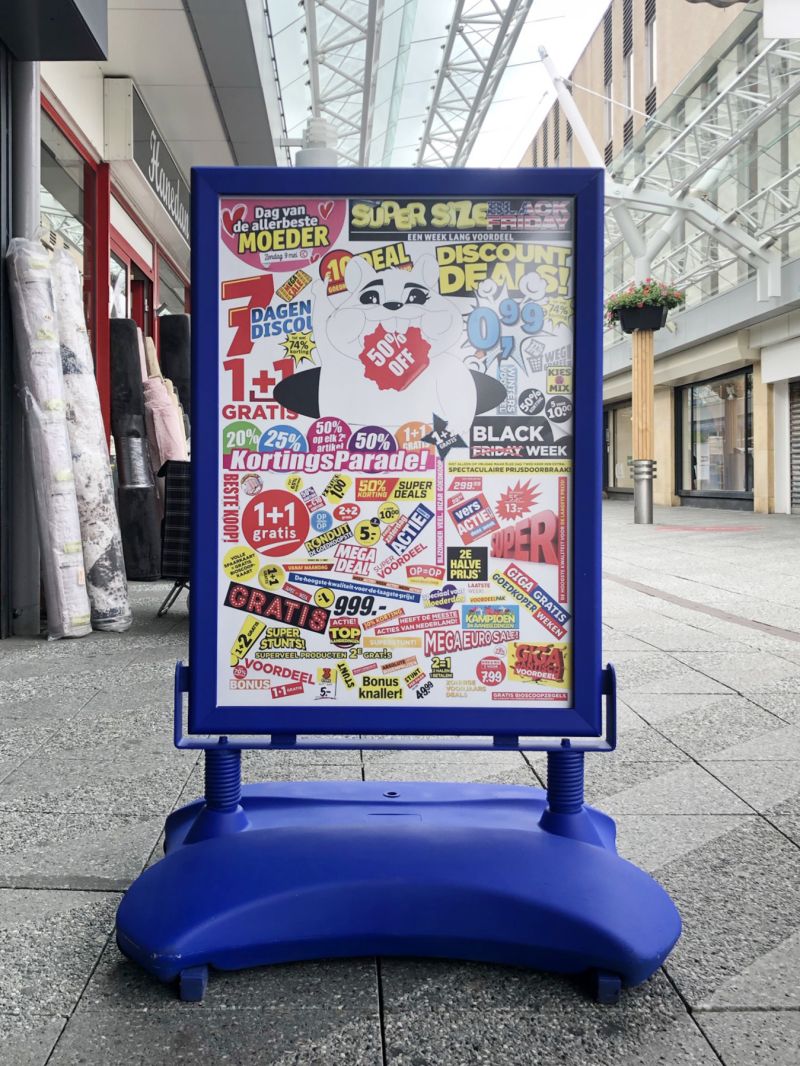 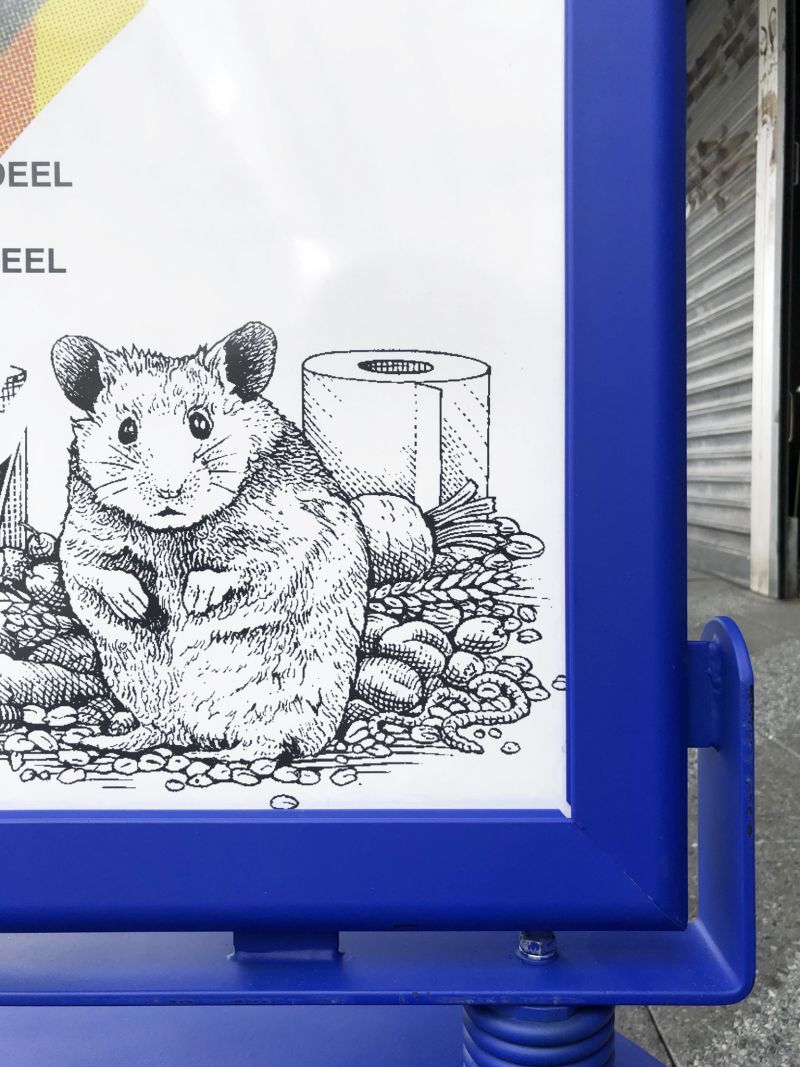 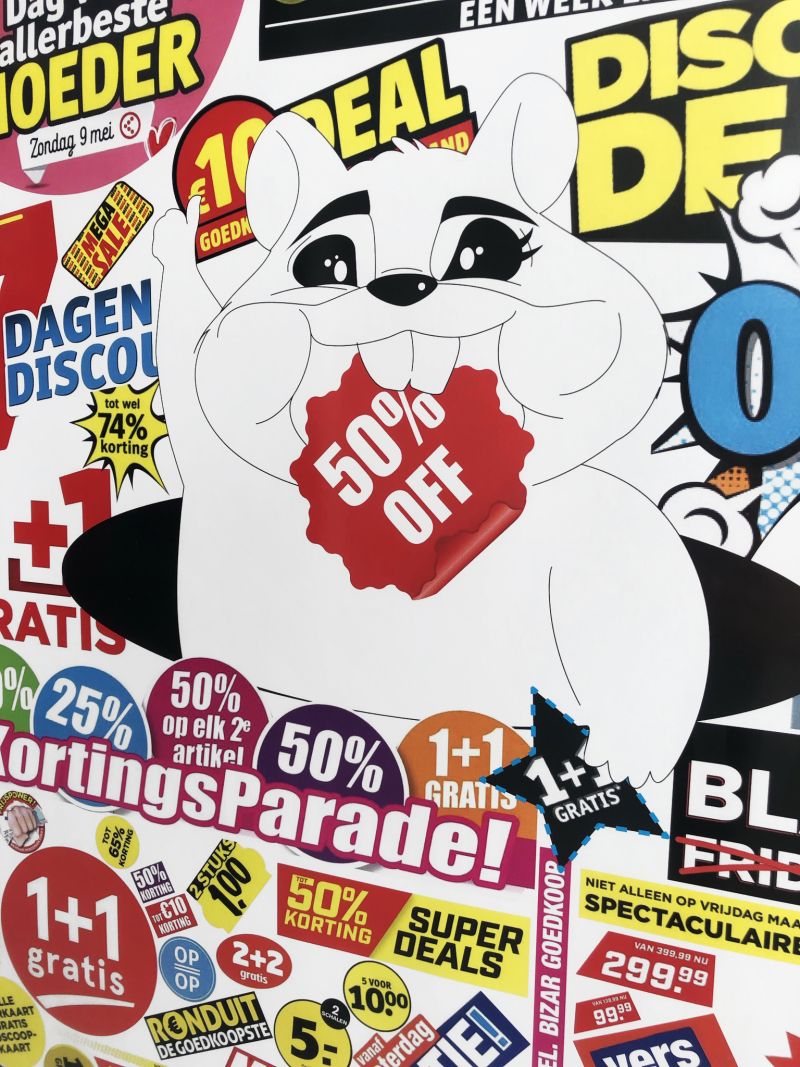 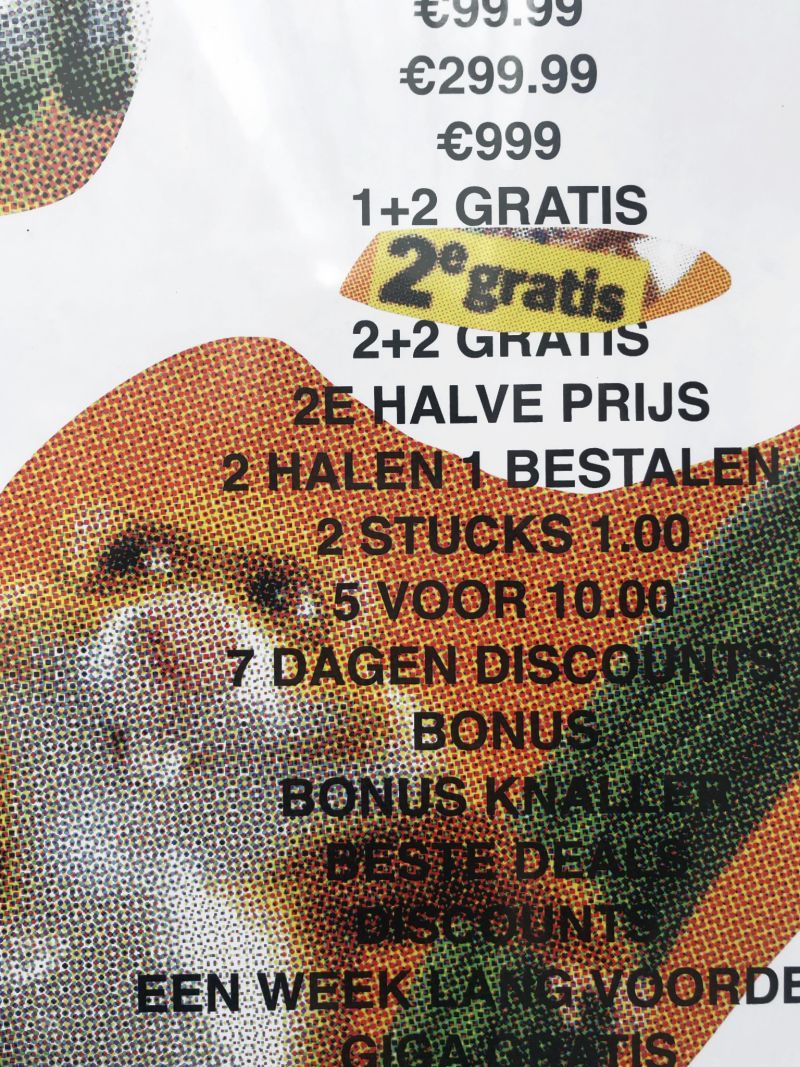 A window with an idea

For the first display and as an introduction to the project, Sudhibhasilp proposes to contemplate the object itself. The blue colour represents a generic space of the empty, like a background standard. By displaying the board entirely empty and blue, the object gains a new presence in contrast to the usual invisibility of its structure.

Lisa Sudhibhasilp (1989, FR) has developed her work and research around the concept of display. Researching how commodities, artefacts or artworks are presented and which procedures are employed to give them value, she uses – and re-uses – certain structures and aesthetics to question the status and hierarchy of the object shown, blurring the line between objects that are seen as displays and displays that are seen as objects. 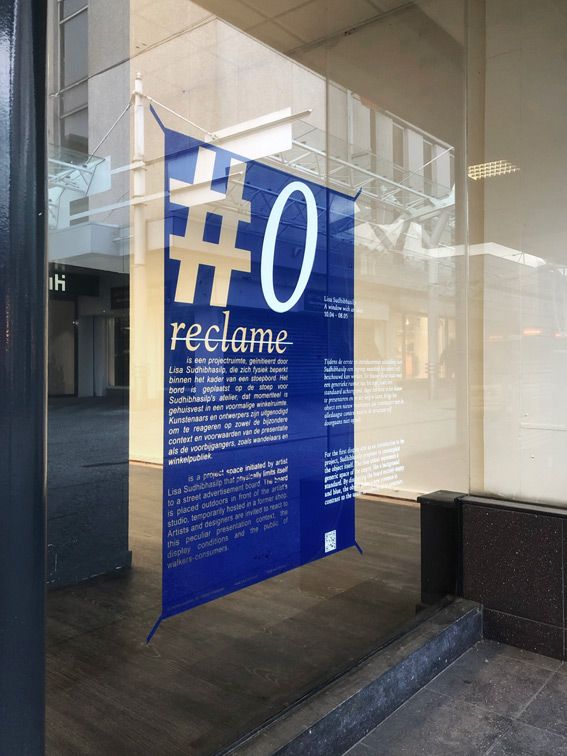 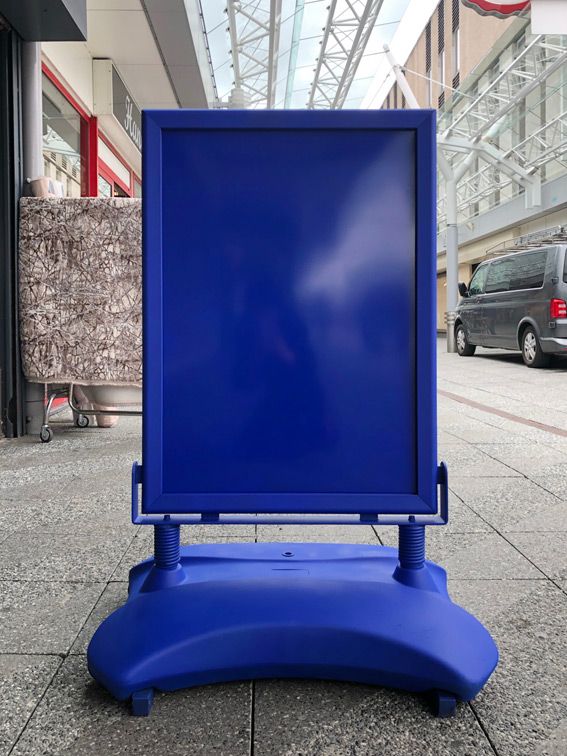 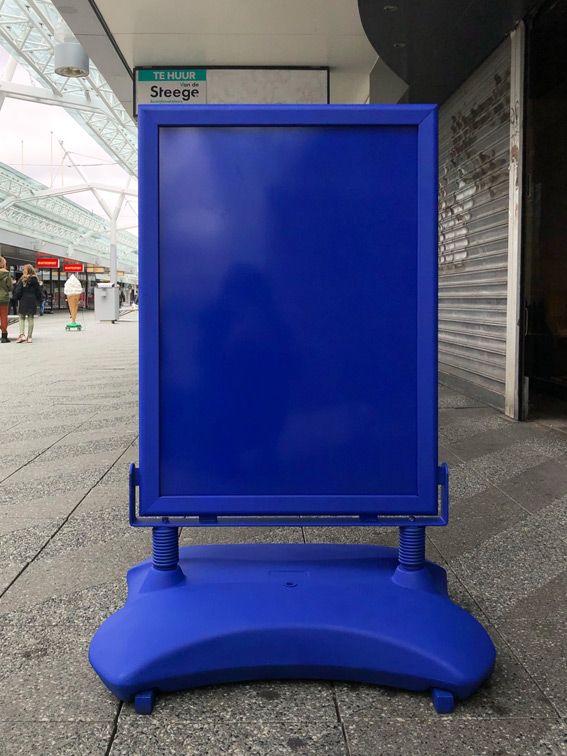 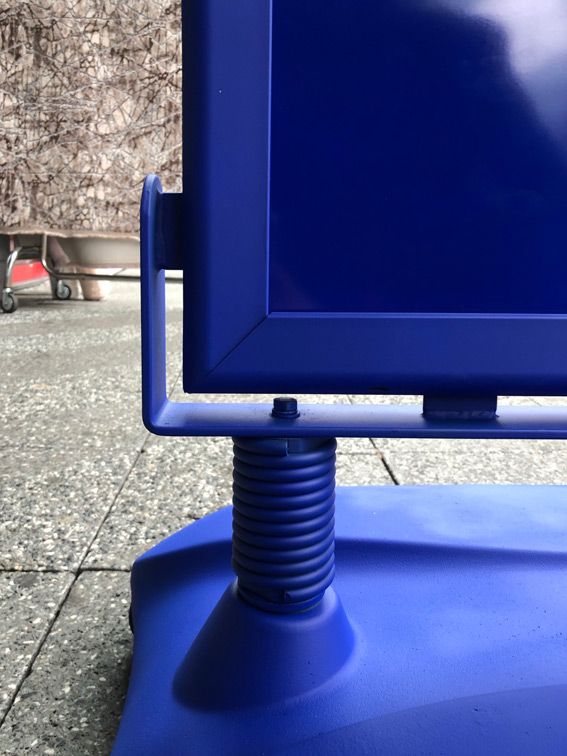 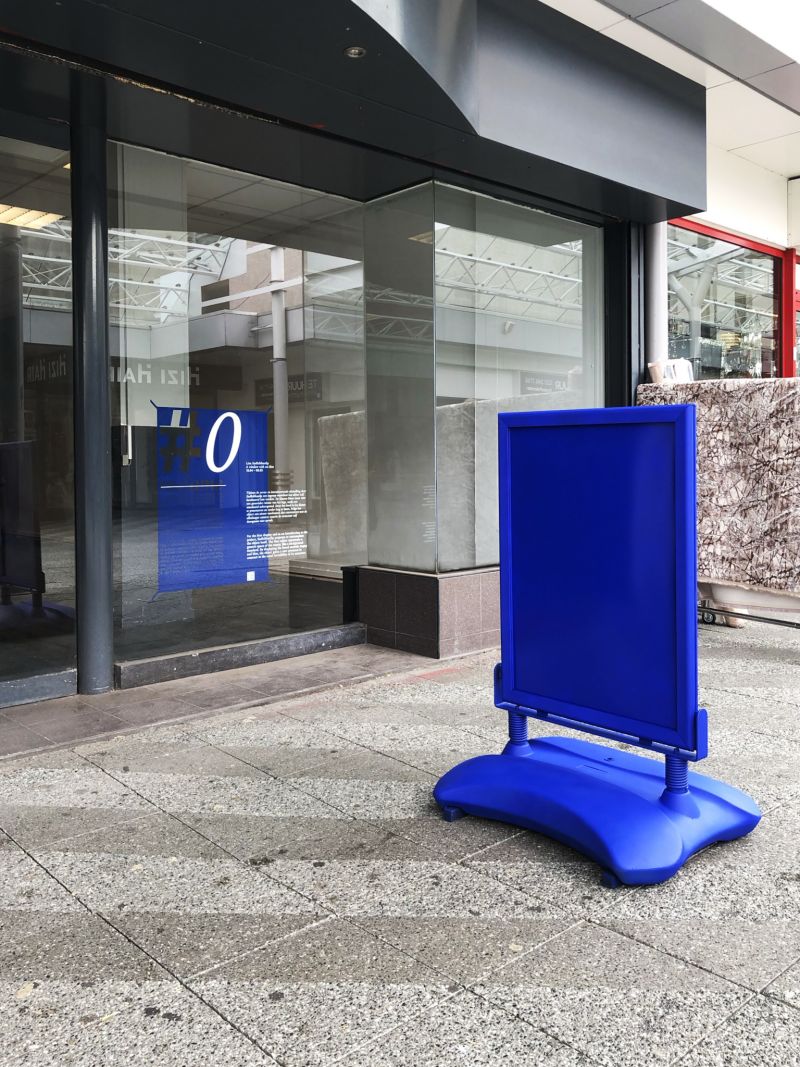